I’d lost track of how I was related to Iris. I just took people’s word for it that I was. We had lived in Singapore eight years, and I hadn’t seen her, or even thought about her all that time. As Mom was driving the two of us over to her house, I tried remembering what she had been like.

I did recall that she always seemed to be the center of attention among the adults, but she didn’t do anything that interested me that much. The only picture I had in my mind was her eating a corn dog and wearing a peach-colored sweater. She had a low, raspy laugh and a gentle smile.

To be honest, Eldon, her husband, was easier to remember. He wore bib overalls and said things like, “Git down off’n that fence,” and “Leave them ducks the hell alone.” But Eldon was no longer in the picture.

We pulled up in front of the double-wide, and when I saw the doormat, things started coming back. 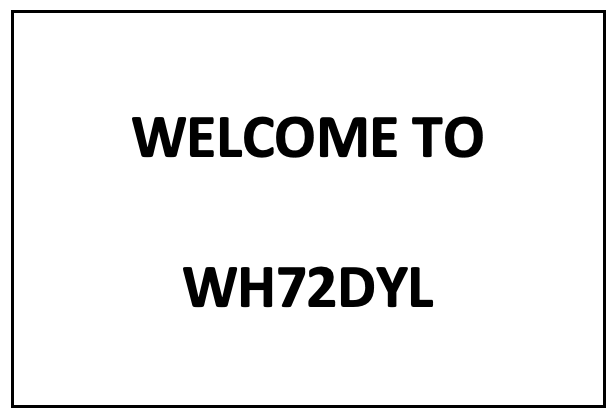 Then I remembered that Iris and Eldon had been real nuts about ham radios. The back yard usually had three or four antennas. She was always talking about connecting with somebody in Chile or Montenegro or Nevada.

Iris met us at the door and hugged Mom real tight. She was one of those laugh-and-rock-back-and-forth huggers, and kept it up for what seemed like forever. She broke away from Mom and looked at me. She did that gentle smile I remembered and said, “Ah, Paige, I know I’m not supposed to say things like, ‘You’re all grown up,’ but . . .” She shook her head, and her eyes got misty. She motioned us inside.

She had pictures everywhere. They were on the mantle, on half the shelves in the bookcases, all over the walls. I was surprised to see some of our family in Singapore. I had no idea Mom had sent her pictures. She still had the same dog, Razor Jack. He wasn’t that old when we left, but he sure was now. The red fur had gone all white around his muzzle and on his paws.

“Say Hi, Razor Jack. We’ve got company.” The old dog picked up his head, thumped his tail twice, released a big sigh, and went back to sleep. Things were coming back to me. Razor Jack always slept across the doorway into the kitchen. Going in or out of there always meant stepping over Razor Jack.

Iris settled into her chair and picked up a scarf from the end table. “I’m going to keep knitting while we visit, if it’s alright. I send mittens and scarves to children in this place where the adults are out of control. I talk with them on the radio some at their community center. They’re very poor, have a tough life. Lots of love, but it’s tough.”

She asked us questions almost nonstop about our stay in Singapore. Every so often Mom would get to ask her something about her life, and she’d give a phrase or two for an answer. But then she’d get right back to us, and what we’d done. She told us about talking with a cobbler on the ham radio one night. She fumbled around for a scrap of paper and squinted through her reading glasses. “He said he lived and worked on Sentosa Island. You know where that is?”

We knew it, of course. We belonged to a golf club there—or Dad’s company had a group membership. It was the most relaxing place in the area. It was the place we could find ourselves almost totally in the company of Americans.

Iris kept knitting as she asked us questions, but every so often she’d put the needles down and massage her hands. I could see they were hurting, but she was determined to get that scarf done and mailed off.

In a bit, we all stepped over Razor Jack, and went to the kitchen where she gave us fudge brownies and iced tea. Both were delicious and like nothing I’d ever tasted. She said she got the fudge recipe from someone in Michoacán, Mexico, and the tea from someone in the Solomon Islands. She said she’d also bought some pottery from the family in Michoacán, Ceramica Michoana, but it had arrived broken.

It began to sink in to me that Iris had gotten around more than we had. In Singapore, I went to an American school. We bought our clothes online. We spent our time at the golf and tennis club with other Americans. Not only had Iris been to more places, but she had done and learned more while there. She was comfortable everywhere.

It was time to go, so we straddled Razor Jack once more and headed for the door. When we got there, I had to ask something. “Iris, why did you name your dog Razor Jack?”

Her face went into that gentle smile again, and she did her raspy chuckle. “There was a time when I played the fiddle,” she said. “Hands won’t let me now and I wasn’t all that good, but I did play in public some, local dances and the like. So, we brought that dog home from a shelter, and they had named him Dandy. He even recognized the name. Seemed to. But about that same time, I was working on a fiddle tune called ‘Razor Jack.’ Well, that dog would howl and carry on when I played it. Eldon said, ‘That’s it. He ain’t no Dandy. He’s telling us he’s Razor Jack.’ That’s how it happened. A couple years ago was the last time I was able to play it, and he chimed right in all over again. Y’know, Paige, if you ever decide you’d like to play violin, I’ve got one you can have. And it even comes with a tune called ‘Razor Jack’ built right into it.”

We were at the porch, and she got me in one of those laugh-and-rock-back-and-forth hugs. I welcomed it, but I have to admit I was a little bit devious. Over her shoulder I looked at the door mat and memorized “whiskey-hotel-7-2-delta-yankee-lima.” Dad’s next post would be in Buenos Aires, and I promised myself I’d find a ham radio and use it.

Fred Cheney is retired and lives on the old family homestead in rural Maine. He divides his time between grooming trails in his woodlot and volunteering at the local elementary. And then there’s writing.